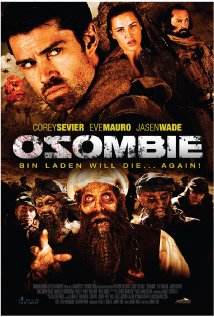 [This was a selection for Boiled Eggs and Brain Eaters 2013.]

This really wasn’t “bad” so much as it was terribly (terribly) dull.  The title screams parody flick but the movie itself tries to play things completely seriously.  You really can’t argue with the decision: parody is harder than most people think and for the budget there’s a much greater chance to pull off a something serious.

The premise is pretty simple (if silly): after being buried at sea Osama Bin Laden’s corpse reanimates as a zombie.  He walks to Afghanistan where, somehow, a plot is raised to create an army of zombie terrorists and unleash them on the world.  A crack squad of NATO soldiers is sent to deal with the threat.  While there they collide with a civilian woman who is trying to track down her paranoid, conspiracy-minded brother who is convinced that Bin Laden isn’t really dead.

The action sequences, when they wander in, really do try and almost rise above but tend to settle into known tropes and ruts a little too easily.  The characters are all cut from the most stereotypical cloth and none ever really rise above mediocre.  The main plots devices are solid enough but completely paint-by-numbers and predictable.

Again, this really isn’t a bad movie.  It does have some strong points, especially considering the silliness of the premise, but they drown in a soup of bog average.  It just ended up boring.  The worst thing I can really say is that this 90 minute movie felt like 2 1/2 hours.