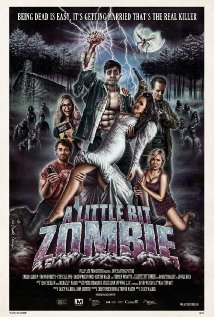 “A Little Bit Zombie” on IMDB

This was our second selection for Boiled Eggs and Brain Eaters 2013 and ended up being our favorite by far.  It has become, in fact, one of my daughters favorite movies.

The premise is pretty damn novel: a mosquito drinks from a zombie and then from our hero, Steve, who acquires the traits of a zombie but retains his senses.  The inability to feel pain is kind of fun, at first, but the need to eat brains (and an inability to eat anything else) becomes quickly problematic.

You see, Steve is actually on a weekend couples getaway with his girl, his sister and her boyfriend.  The plan was to spend the whole time planning out the perfect wedding for his demanding fiancée.  His new situation means that their plans have to change.

If you’ve spent any time with SyFy Channel original series then you’ll recognize most of the cast.  Many of them have starring roles in shows like “Sanctuary”, “Being Human” and “Primeval: New World”.  If you’re a fan of these shows (which we are) then the movie definitely gets an easy likability bump.

Not that it really needs it.  The jokes are silly, but deft.  The acting and staging is all high quality.  The script is clever and quick.  The only real complaint is that the movie really didn’t know how to end.  Things go off the rails a bit then veer back and everything just kind of stops.  That’s a minor complaint in the larger scheme.

Zombie comedy is hard (which is why, with few exceptions, most of it devolves to fart and dick jokes) and doing anything surprising or new with zombies is even harder.  This movie succeeds at both.  It’s one of the more likable movies, overall, that we’ve seen and an excellent family selection (this is a very soft “R” rating) for zombie fans.