Posted by kiwidust on December 7, 2013
Posted in: Movies. 2 comments 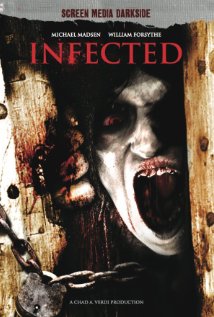 The first hint that this may not be something worth spending your time on is the fact that it was released as “Infection Z” in Europe. Movies released within months of major blockbusters and featuring ham-fisted variations their titles are rarely worth the almost non-existent effort to lay still and watch them.

This one blames a sorta-zombie outbreak on ticks with a hackneyed prologue about Lyme disease and bacterial infections. A bunch of people are meeting up in the woods for a fun-filled weekend of killing animals, doin’ it and family angst. The film features both Michael Madsen [IMDB] and William Forsythe [IMDB], both of whom I would consider myself a fan of.  Both of whom have been involved some amazing projects. This isn’t one of them.

The movie is really just terribly scattered-brained. It may have been decent in that low-budget, interesting idea way but couldn’t decide what it wanted. The infected waver between zombie-crazy and just plain crazy in a way that makes impossible to tell whether mowing them down is action-movie goodness or just plain sad.

The zombies talk, act like they have a headache, eat somebody, then talk some more. I’m being flippant, but the movie is actually strongest here. Sticking with it could have resulted in a moody, tension-filled thriller as the infected moved hidden among us until all hell broke loose. Instead the movie just shifts meaninglessly into zombie rampage mode with no pause or explanation.

There are some good moments here but they are very few and far between. Both Madsen and Forsythe have a lot of talent to offer but it was either outright ignored or, perhaps more likely, they just didn’t care. Neither should you.