Random Thoughts on The Walking Dead, “Too Far Gone”

Posted by kiwidust on December 7, 2013
Posted in: Televison. Leave a Comment 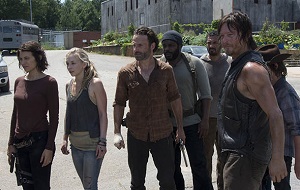 Here are a few random thoughts on The Walking Dead episode 408, “Too Far Gone“. This was the mid-season finale and that means big (usually bad) things!

Robert Kirkman had built a deserved reputation as a gloriously devious, unfeeling bastard in the comics long before the show began. Do you like that character? Well, they may die terribly, for no real reason, in the next panel. Nobody is safe, nothing is sacred and nothing out of bounds.

Characters don’t only die  – they die meaninglessly and without warning. They may also be dramatically, permanently altered. Comic Rick lost his hand to The Governor in their first encounter. Comic Carl lost an eye and good chunk of his face to a bullet.  On the plus side, though, comic Sophia is still alive and kicking even if she has lost more parents than most people ever have.

The show has been less graphic (yes, less graphic). It obviously can’t continually support the same kind of physical alterations to the main characters that the comic can (not drawing a hand, for example, actually require less effort). In general bloodthirstiness show does attempt to give the comic a run for its money.

It’s difficult to understand why The Governor decided to make an example out of Herschel instead of Michonne but he did. Now Herschel’s dead.

The show habitually reworks iconic scenes from the comic by transposing characters or locations and this is no different. In the final reckoning I think I liked the comic version better.

The comic rendition of The Governor was vastly inferior to the show’s. He was an ugly, cardboard villain and crazy as a bag of rats. The comic gave almost no explanation for his position and the respect he was given. In the show David Morrissey’s Governor was suave, charming and sly. It was clear how he rose to the leadership of Woodbury and maintained the devotion of his people.

In the comic, The Governor kept only his closest lieutenants with him when he treated with the prison; only they knew his true nature. When he returned to his people he filled their heads with lies about the crazy cannibals that would come and eat their children if not dealt with. When the attack on the prison came it was an all-out charge. Compressing the events so dramatically here made the entire proceeding feel false, forced and rushed..

The death of The Governor was satisfying but but was more hollywood than I would have liked. That everybody “got in their licks” in may have been cathartic but the slightly organized anarchy of the comic felt significantly more true-to-life. I’m glad The Governor is dead – I would have actually preferred that he never came back.

I was sorry to see Meghan (and presumably Lilly) go but, let’s be honest – what the hell was that? Even if walkers couldn’t cross the river,what about the other direction? You know, the direction that a 10-ton motor home could drive in from? And why leave them alone at all? It all just felt wrong.

Despite the weak path to it, the actual extended attack and defense of the prison was excellent. I really appreciated that there was a clear plan in place even if it didn’t come of without a hitch. I was never sold on the prison being as valuable as they continually intimated. It had too many compromises and to many weaknesses compared to many of the other places that we’ve seen.  I still think Morgan, crazy as he may have been, did pretty damn in comparison to the much larger, much better equipped groups.

I would have still rather seen the prison fall from a zombie herd. But I think I’m going to be glad to see it gone. There’s a lot of chaos now and the group is splintered. Rick and Carl on their own, the bus off to who-knows-where, Tyreese and the kids, Daryl and Beth and finally Maggie, Bob and Sasha. I hope it doesn’t go on too long, but a nice frenetic, high-tension episode or two flitting between the problems of these many, small, vulnerable groups would be a nice break from the more dramatic, quiet introspection of the recent episodes.