Zombie of the Week: Adam Savage

Posted by kiwidust on March 2, 2014
Posted in: Zombie of the Week. Leave a Comment 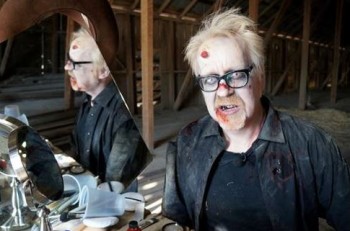 We may not have been completely sold on the Mythbuster’s Zombie Special. It was a weak episode at best with little of the stealth education that makes Mythbusters so amazing. The myths favored opinion and luck vastly more than than any specific science and seemed forced.

True, actual myths may have been less than family friendly. How hard is it, really, to decapitate somebody with various weapons at various stages of decomposition? How much force does it take to crush a skull? Can you really disembowel somebody with bare hands?

Still, the episode was a lot of fun and had the added bonus of allowing a whole crew of rabid fans (of both zombies and Mythbusters) to help out. For as much glee as the cast and crew generated, nobody seemed able to top Adam Savage. His sheer exuberance made the episode, weak as it was, a joy to watch. For this, we celebrate him!