Zombie of the Week: Mormon Jesus

Posted by kiwidust on April 19, 2014
Posted in: Zombie of the Week. Leave a Comment 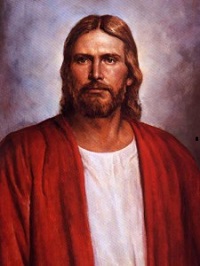 You may be ready to call shenanigans on us because, as you remember, we celebrated Jesus as Zombie of the Week last year. Well, apparently this Mormon Jesus is a different guy altogether!

This rabbit hole goes pretty damn deep, like China from Albuquerque deep. Not being theologians – or truly interested – we just got the gist. Apparently, the main argument revolves around unreconcilable doctrinal changes. One side says that Jesus is a god, all by his lonesome, while the other says that Jesus is a part of god, in an “I’m my own grandpa” kind of way. Mormon Jesus also spent a lot of time in upstate NY and was reportedly pretty racist. There’s also something about whether he had a bunch of wives and kids, whether Mary was a person or a god and, depending on who you ask, a bunch of stuff about other planets.

What both sides completely agree on is that both Jesus’s (and, we’re assuming, any of the other ones that may be out there) were zombies. They both died, they both reanimated later and they both want your brains.

So, to be as inclusive as possible, today we’re going to be celebrating the one that’s a god. Or maybe the one that’s not… it’s confusing. In any case, which ever one we did last year, this year we’re doing the other one. The Mormon one.