Posted by kiwidust on October 24, 2015
Posted in: Televison. Leave a Comment 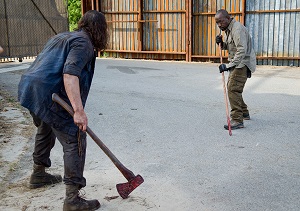 Here are  three random thoughts on The Walking Dead episode 602, “JSS“. This was an amazing, high-adrenaline episode that should happily quiet those longing for more action.

All Catastrophes should be Timed by Casserole

The casserole was an amazing little conceit. As Carol collected the ingredients, we saw how she was meshing with the Alexandrians and holding her own in their petty social power struggles. Her mention of Ed also makes an important point here: this “version” of Carol is a purposeful regression to what she used to be. She’s not inventing a new personality to fit in, she’s dusting off the mask that she wore for years with her abusive husband.

The comparatively idyllic life of the Alexandrians was highlighted as she stood in her clean, well-appointed kitchen, checked the baby monitor, put the casserole in the oven and set the kitchen timer. The scene then transitioned shockingly from a call-back to the ultimately meaningless sparring about Mrs. Neudermeyer’s smoking to her brutal death by filthy invaders.

The buzzing of the timer at the end of the episode, 45 minutes minutes later, brilliantly displayed how little time it takes for lives to be shattered. The normality with which Carl calmly removes the finished casserole from the oven now seems ridiculously out of place.

Enid we Never Really Knew Each Other Anyway

Sorry. Can’t here the name “Enid” without that song going through my head. Here’s your earworm for the day:

Enid’s story was beautifully done, but sadly short. I would have loved to see it expanded out into an entire episode. I liked the idea of her mantra, JSS (“Just Survive Somehow”), but would have liked to see the details of its origin more than the minor mystery the initials were played for. As much as we adore our regular characters, one of the greatest strengths of “The Walking Dead” is the sheer breadth of stories available. Pausing the main story for a moment and digging deep into a new character or angle on the past events is always great.

What the Hell Do the Wolves Want?

The Wolves just aren’t gelling for me. Are they devious masterminds or rabid dogs? Are they simply out to survive at all costs or something else? The slow build created a very specific impression of them (to me, at least) while their actual reveal created something like the polar opposite of that impression.

Rick and company find a truck full of zombie torsos at Noah’s ransacked community. There’s no explanation for this, but it seems ritualistic to say the least. Daryl and Aaron find the remains of a Wolves encampment where there’s a pile of dismembered limbs (apparently the result of more torso gathering) and an apparent rape victim. This seems to indicate a brutal lack of control. When Morgan is attacked by the Wolves at his campsite they seem unorganized and opportunistic.  Then consider the truck trap seen in the Season Five Finale. The trap displayed a remarkably high-level of sophistication and planning. Care, thought and effort went into its design and construction. Its size and complication also indicate that they’re settled nearby, rather than nomadic.

The attack on Alexandria exhibits some of the same confusion. In some ways we see a devious cunning. The timing coincided with the absence of the community’s main fighting force, indicating that the attack was planned. The precision Molotov attack on the sentry was effective and well considered. The use of the semi-truck displayed forethought and an ability to leverage available resources. At the same time it seemed like each of the wolves had their own plan and nothing was coordinated in any way. We never see Molotovs used again. That possibly devastating truck-attack was carried out by exactly one person with no backup. With very few exceptions the Wolves seemed to be acting as solo hunters utterly engrossed in their own brutality.

More confusing is the basic motivation of the Wolves. Some of the wolves seemed intent on gathering resources, although none are organized enough that they attack the actual storehouse. Some were clearly taking prisoners, for some unknown reason, while most were brutally slaying anybody they met and moving on. A few seemed obsessively intent on dismembering their victims rather than finding others. Finally, right before Carol ended him, Morgan’s prisoner seemed to be raving religiously. “We’re freeing you,” he said, “it’s a trap. People don’t belong here anymore.” Yet this was the only interaction like this of many.

What do the wolves want? What’s their deal, what’s their kink? We need to settle that soon, I think, because right now they’re all over the map.

Finally, it was disheartening to see that the truck horn was just an accident. (It also made me think that if they didn’t want the walkers leaving the quarry they could have just put up a similar air horn on the other side as a distraction while they repaired the barricade.) If the horn wasn’t a planned disruption of Rick’s plan, was the attack even planned at all? If not, that would mean that the barricade happening to fall while they were standing there, the attack, the horn and everything else were just ridiculous coincidences.

We’re just two episodes in and as much as I’m loving the herd and the return to action, there’s way too much deus ex in that there machina for my taste.