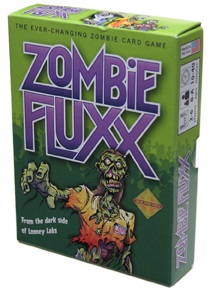 Fluxx is a card game that celebrates change.  Starting with a single rule (draw one card, play one card) and a hand of three the game evolves constantly from there.  At any moment any (or all) of the rules can be changed, added to or eliminated.  You win by meeting the requirements of a goal that can also change from moment to moment.

The basic cards can be extended with a large number of booster packs and there are no less than ten custom deck variations with themes like sci-fi, pirates, the Wizard of Oz or, in this case, zombies.  Decks and expansion sets can be played separately or Frankenstein’d together to create even weirder experiences.

The zombie deck introduces a new card type, the “creeper”, which is essentially the opposite of the standard “keeper” type.  The new cards cover all of the major zombie tropes.  Keepers include the shotgun, chainsaw and brains.  Goals could have been pulled directly from any number of zombie movies and even include a special card that allows the zombies to win.  Zombie fans have a lot to like here. 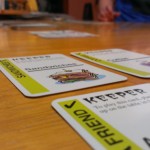 Find the right keepers, at the right time, and you’ve won! 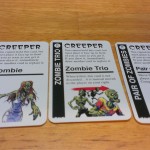 Creepers try to keep your from winning. 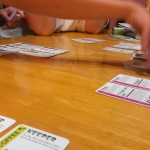 The main problem with the game, like most complex card games, is the breaks in momentum due to confusion.  Unless you’ve played the game enough to really know the cards you’ll spend much of your time patiently waiting for other players to read their cards and deciding how to resolve the many times when an esoteric rule was forgotten.  Some may also find the unpredictability of the game a minor drawback.  Most games take between 20 and 30 minutes but they fly by in just a few minutes or drag out to more than hour.

These minor problems recede as your group becomes more comfortable with the way the game works (although they may return briefly when you add a new player).  Once a groove sets in, the game gets faster and significantly more fun.  This is a game that rewards the time you spend with it.

Game Review: The Last of Us Demo 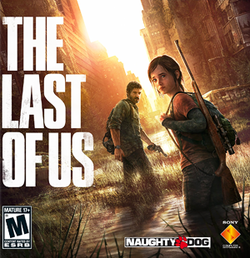 This is a short review of the playable demo of “The Last of Us” released on June first.  Here we’ll be focusing on the game’s zombie enemies.  Visit our sister site, DepressedPress.com, for our thoughts on the game’s characters and environments.

“The Last of Us” is set some 20 years after a parasitic fungal plague has destroyed much of human society.  Humanity lives on in controlled quarantined zones while the victims of the plague roam the remains of our cities which are slowly being eroded by unchecked nature.  Victims of the plague fall into two broad categories that mirror some of the major schools of thoughts on zombies.

The fungus attacks the brain turning fresh victims into highly aggressive “runners”.  The runners will instantly attack anybody in their line of site.  When not attacking they wander aimlessly; clearly confused. mumbling and in extreme pain.  Your best bet is to sneak up and quietly throttle them.  This takes time however, so you need to make sure that any others nearby don’t see you do it.  Should that happen the entire nearby population of runners will be barreling down on you in a few seconds and your only hope is a barrage of very lucky (and wasteful) gunfire.

After a time – it’s hinted, years – the fungal infection engulfs the entire head of the victim.  These horribly misshapen “clickers” are more methodical and leverage their hearing and echo-location to hunt their prey.  It’s also hinted that they can be ambush hunters.  Clickers can be distracted or even momentarily stunned with thrown objects but will mob the slightest noise in force.  You can only navigate at a (slow) quiet crawl around them and even then their erratic movement makes them dangerous.  Once aroused they are fast, feral and tenacious.  Having almost no sense of self-preservation melee weapons are nearly useless and even with gunfire they’re much tougher to drop than a runner.

It’s unclear how the infection spreads, exactly.  In the demo we’re first introduced to the clickers when we find the corpse of one lying against a door.  The fungus has (apparently very quickly) spread out from the corpse to engulf much of the doorway and frame.  As Joel is forced to peel the body away to gain access a cloud of spores is released.  His seemingly lack of care may be a sign of kind of immunity or treatment or perhaps just a sad fatalism.  We’ll have to wait for the full game to get the background story (assuming we get it at all).

While the demo was very brief with only about 30 minutes of gameplay and many of the details haven’t been released the fungal plague has already been given a convincingly realistic (if partial) life-cycle.  It’s already one of the more intellectually interesting zombie outbreak triggers (read up on Cordyceps if you don’t plan on sleeping nightmare-free for a while).  I do hope that there’s more depth to be seen but even if not it’s already thought provoking.