Zombie of the Week: Buckethead Zombie 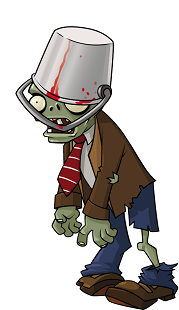 Buckethead zombie is, as you might have guessed, a regular zombie with a bucket.  A bucket on his head.  It may be best to allow the esteemed Suburban Almanac to explain:

Buckethead Zombie always wore a bucket. Part of it was to assert his uniqueness in an uncaring world. Mostly he just forgot it was there in the first place.

Plants vs. Zombies has a very large collection of memorable zombies (we’ll get to them eventually), but one of the first ones to really annoy you was probably this little shambler.  Sure, an extra pea-shooter or two settled things, but until then all you got was *clink* and chomp.

So we celebrate the buckethead zombie as we simultaneously lament all the time we’ve spent with him over the years.  Seriously… the books we might have read!  The work we could have done!  The love we could have made!

One comment on “Zombie of the Week: Buckethead Zombie”