Zombie of the Week: Fallout Ghouls

Posted by kiwidust on September 22, 2013
Posted in: Zombie of the Week. 1 comment 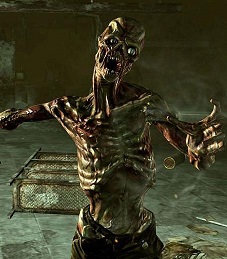 Ghouls are one of the most interesting and complex group in the amazingly interesting and complex “Fallout” universe.  Like most of our choices lately there is a good argument that ghouls are not, in fact, zombies, but as always these are our rules to make.  It’s not really clear if they’re the risen dead (as is sometimes intimated) or just lucky individuals mutated by radiation.  The word “lucky”, of course, being questionable for somebody that’s given a vastly extended lifespan in exchange for their skin and much of their flesh.

In the game’s mythology most ghouls were created on the day of the great war in 2077 and many are still kicking as of 2281 when “Fallout: New Vegas” is set.  Many ghouls have gone feral, mindless and permanently aggressive, and roam the wastes attacking anything they come across.  A significant minority have retained their intellect and seek, often in vain, to coexist peacefully with normal humans.

Considering the delicate balance of decay and regeneration that maintains their existence it’s likely that all ghouls will ultimately turn feral.  It’s unclear exactly how long ghouls can live or how long they can possibly live without turning feral.  Ghouls are completely sterile and while isolated instances of new ghoulification exist it’s clear that ghouls are a dying breed.  As eloquently put by the ghoul Typhon in one of “Fallout 2’s” more famous lines:

There ain’t any ghouls but old ghouls. We’re all sterile, see, but we’re incredibly long-lived. We’re the first and last generation of ghouls.

Ghouls have provided many of the best moments in the series.  In “Fallout 3” some of the scariest moments are found investigating the feral ghoul-infested Dunwich Building while some of the most memorable characters and interactions are found in the ghoul “city” of “Underworld“.  In “Fallout: New Vegas” you can convince ghoul cowgirl Beatrix Russell to take up a life of prostitution to service customers with “special tastes”.  There are literally hundreds of other characters, situations and moments across the series and for that we dedicate this week to our misunderstood, and often decapitated, friends, the ghouls.

One comment on “Zombie of the Week: Fallout Ghouls”