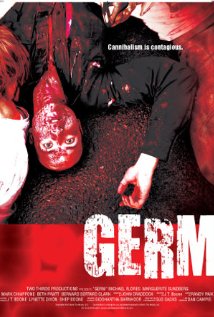 The military (which is apparently based out of somebody’s rec room) has attempted to shoot down a satellite for …reasons.  They miss, for other reasons, and the satellite crashes in the woods near a small town.  The satellite is covered in goo and, for further reasons, touching that goo makes people want to violently eat other people until their brains explode.

The movie really tries and actually puts it’s budget (clearly in the hundreds of dollars) to decent use.  The special effects are about 50% splashing faux blood around and 50% quick camera cuts to reaction shots but in context work they work well enough.  The infected are ripped right from “28 Days Later” with a longer incubation time.  They run around screaming until they grab somebody, then they eat them messily.

The acting is mediocre middling to pedestrian poor but that’s fine because so is the script.  The storyline only follows a few characters and they spend most of their time running or screaming.  There are nice touches, as when one wounded character is moving down the street and hearing off-camera gunshots and screams.  Many low budget movies ignore the overall environment that they’ve created; that this one didn’t is a plus.

The real problem here, the thing that truly pulls it south, is the completely terrible camera work.  Not only are most scenes are shot way too close but it’s pretty clear the cameraman was suffering from some advanced palsy.  Conversations are shot over-the-shoulder but so tight and at such an acute angle that the face of the speaker is nearly always obscured by the person in the foreground.  The few establishing shots are either too far, too close or two… weird, to be of much use.

Considering the budget it’s difficult to fault this one too much.  It’s not good; but it’s not good in that way that you know they tried hard and simply met their limitations rather than gave up.  It’s the kind of movie that earns some credit just because the folks involved had enough gumption to get it made.  If you can relate to that you might enjoy this a bit.  On the other hand if you’re looking for polish then you’ll be very disappointed.