Posted by kiwidust on November 4, 2013
Posted in: Televison. 3 comments 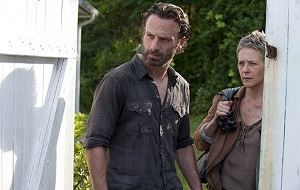 Here are a few random thoughts on The Walking Dead episode 404, “Indifference“.  This was the fourth episode in the season and things are definitely heating up!

The governor showed us, in the creepiest way possible, that severed zombie heads are still animate.  So, as cool as it looks when Michonne wades in and decapitates a crowd of walkers, isn’t she just leaving piles of bitey landmines for whomever wanders in next?  Sure, severed heads with no form of locomotion – no matter how bitey – are probably not a huge threat, but it still seems pretty risky.

I picked on Tyreese last week for carrying around a plain-old framing hammer but maybe he’s got the right idea.  It’s small, relatively lightweight, has two modes of operation and puts down zombies for good.  In fact every other method of dispatch favored by the survivors does – except Michonne and her signature katana.

The sequence with the college brought up a few thoughts for me but the main thrust, Bob’s drinking problem, left me rather cold. The foreshadowing of his problem, from the first episode, was well done but this ultimate revelation felt ham-fisted.  I did get a kick out of Daryl’s forehead-focused stand-down tho’.  It came so close to comically ridiculous while remaining firmly bad-ass.  I loved it.

Since they were at a veterinary college it made me start wondering: where are all the dogs?  I’m sure many of them died in the initial outbreak (being locked up or chained).  You can also argue that many others were caught by zombies or even, perhaps, less discriminate survivors looking for a meal.  But dogs are smart.  The entire population of canines wouldn’t, I think, have just died out.  This is Georgia, after all.  The land of mild winters and hunting hounds.  Even if zombies aren’t edible I would think the dimmest, fattest pug could at least stay out of their way.  Where are all the dogs?

There are two main reasons why answering this question could be interesting.  Firstly, roaming packs of feral dogs would offer our survivors a new and novel enemy to consider.  Fast, vicious, coordinated predators to counterbalance the slow, mindless undead.  Howling dogs may also attract zombies (both parties being able to feed on the leftovers of the other) making for an interesting, multi-layered threat.  I’m not suggesting that I’d like to see our survivors cutting down Lassie, Benji or Air Bud but a little variety couldn’t hurt.

Secondly, domesticated dogs, just as they have for thousands of years, support and improve human survival.  In a world where anybody who dies in their sleep comes back as a walker wouldn’t having hyper-vigilant canine companions who would bark their fool heads off whenever somebody turned be useful?  Would Patrick’s death and reanimation have caught the cellblock so thoroughly unaware if there were a bunch of poodles lying around?

The second big question that came out of the college was the difference between the “sick” walkers and the regular walkers.  The group sees a group of walkers with the tell-tale bleeding eyes that mark them as “infection-carrying” and they run from them rather than engage.  Other walkers in the same area don’t have those signs.  Wouldn’t the former have to be “fresh” zombies – perhaps less than a few months old – to have died from the disease?

Assuming that these infected walkers are indeed “fresh” doesn’t the fact that we’re seeing so many of them mean that there has to be (or at least were) a lot more survivors out there?  We’ve been seeing them in dribs and drabs but wouldn’t approaches to the prison from new people be pretty common overall?  There doesn’t seem to be any rhyme or reason to how or when this new breed appears.  I would like to see some token explanations, at least.

In the case of the school it could have easily been used to increase tension to see evidence of another group of scavengers present – likely with the same idea as our group.  Finding them later, dead from the disease and reanimated would have underscored the severity of the issue very well.  It could have also been used as a nice shortcut as the other group might have, for example, already gathered the needed supplies and left a working vehicle.

Speaking of other survivors this week hurt.  The two obviously dumb-as-hell kids were, let’s face it, needless victims of Rick and Carol’s nearly mute power struggle.  Carol, having progressed into what might be called an aggressive social Darwinist, repeatedly evoked a theme of “cull the weak to allow the strong to live”.  Rick, still returning to himself after his personal tragedies and a long period attempting forced change, personified the more evolved “strong must protect the weak” mentality.  I loved the dichotomy that was constructed between the two but would have also liked to see some new people added to the group.

The ultimate portrayal of Rick’s choice – and Carol’s begrudging acceptance of it – was the highlight of the season, so far, for me.  It perfectly captured the struggle that had been growing steadily between the two while reinforcing the deep respect that each had for the other despite the fundamental differences.  As much as I felt last season’s multiple locations confused things I would still like to see what happens with Carol.

The questions raised will likely be answered quickly next week but are still interesting as hell.  What will Rick tell the group and, more to the point, what will he tell Tyreese?  If he tells the truth, is effective exile enough for Tyreese?  If he lies, how will he ultimately mollify Tyreese?  Assuming they live who will step up for the girls, Lizzie and Mika?  Will it possibly be Maggie and Glen (creating a shade of Sophia’s comic storyline)?

3 comments on “Random Thoughts on The Walking Dead, “Indifference””