Posted by kiwidust on November 25, 2013
Posted in: Televison. Leave a Comment 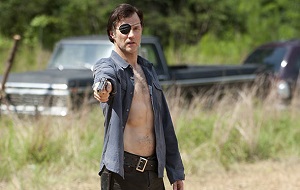 Here are a few random thoughts on The Walking Dead episode 407, “Dead Weight“.

Why All the Hate?

When we see the other group in the woods and Pete suggests inviting them in… why doesn’t he accept that? I understand that supplies are limited but there has to be an understanding that more people mean more possibilities? More bodies to guard the perimeter, more scavengers to gather more food and equipment, more soldiers for defense and, hell, just more people to date.

How does this seem to elude everybody (except for dead Pete, who was so sure about the idea that he argued it for a solid four seconds)?

Similarly, why is the group sitting out in the open in motor homes anyway? We see some inexplicably perfect pit traps – but they’re far from good protection. They say they’ve ringed themselves with cars but walkers still make it in. Why is the middle of a field – and a pretty damn ugly field at that – “the place to be”?

You know where’s nice? The apartment building where Lily and Tara were living, safely for nearly two years! The ceiling didn’t leak and there was plenty of prime scavenging nearby. Why stay in motor homes when there are any number of actual homes to chose from, any one or two of which would have to be significantly easier to fortify.

I do understand that towns and cities mean more walkers but there’s got to be a happy medium. Find a nice sturdy place on the outskirts and set up shop.

I did love the tension built up as the hunting party came across the decapitated corpses. That kind of implied back-story really gets my blood pumping. But, in this vein, why abandon that very nice cabin? We saw the guys sitting comfortably around a merry fire, why not do that every night? Sure, that one cabin wouldn’t hold everybody but having a solid defensible structure to fall back too can’t be a bad thing, right?

… and I’m still kind of annoyed at that.  It’s clear from the teaser they’re going to recreate the fan-favorite tank attack on the prison. This made sense in the comic with a much less nuanced Governor and a much more attractive prison. Here it simply doesn’t work as well.

Primarily I’m annoyed because I really hoped  we’d see a new direction with The Governor. I envisioned a scenario where he approached the prison to ask for Lily and Tara’s safety – perhaps even in exchange for his own life. Just returning to attack a highly fortified (and, let’s not forget, diseased) position isn’t the act of a many looking out for his new family.

Secondarily, it just doesn’t make sense. The Governor has already shown that he can create a safe, manageable community.  Yes, he burned Woobury… but why not move four blocks over and do it again? I’ve said it before but the prison of the show isn’t  all that great. It’s got severe issues with defense, resources and the simple fact that a large group has lived there so long has to mean that there’s very little left to scavenge nearby.

I know he’s a fan favorite, I really like David Morrissey’s acting and I’m very happy that they gave the character more depth than the freaky, greasy pedophile from comic… but I’m also going to be very happy when we can finally say goodbye, for good, to The Governor.