Zombie of the Week: Poison Zombie 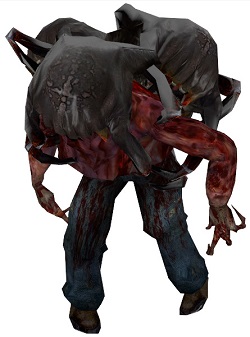 Half-Life 2 is a game full of willies-inducing moments. Some of the very best are courtesy of the fine fellow pictured, the poison zombie. They were introduced in the mother of all creep-fests, chapter 6, “We Don’t Go To Ravenholm…“. Few games, before or since, have been able to produce the sheer level of dread embodied by this sequence.

Poison zombies shuffled slowly around, preferring dark, closed spaces. Disgustingly, they played host to a small cadre of poison headcrabs that left them hunched and awkward. These passengers would, at any provocation, leap at the player en masse. The poison was non-fatal compromised the player severely, making this one of the most insidiously dangerous enemies in the game.

There were plenty of insta-deaths in Half-Life 2. Explosions, crushing traps and drive-by smearing from ant-lion soldiers. The poison zombie, however, drew out your death over many adrenaline filled seconds. Bloated and slow-moving the zombie was the personification of understatement.

Encounters were met with furious backpedaling followed quickly by the tell-tale flash that indicated that you’d been bit. A frantic few seconds that felt like minutes followed as you desperately attempted to stay alive until you could recover. Making matters worse, this was also the toughest zombie you’d face. It shrugged off carnage that would put anything else down for good all while moving toward you in inexorable slow-motion.

One comment on “Zombie of the Week: Poison Zombie”