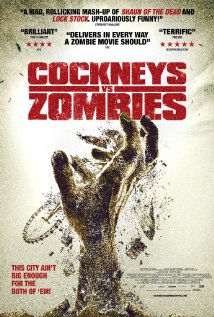 “Cockneys vs Zombies” on IMDB

Two bumbling, gangster wannabes are at a loss on how to help when their granddad’s retirement home threatened with foreclosure. When they decide that robbing a bank is the best way to get the needed cash, they collect a gang of misfits to get the job done. As you might expect, this plan does not go well. Luckily, if you use that word very loosely, some construction workers break into a medieval tomb filled with the undead and the police quickly realize that they have more important things to deal with.

Of course a small, soon-to-be closed retirement home isn’t high on that list, so the gang fights their way across the city to the rescue . Until they do, and even after, Granddad (played by the always solid Alan Ford [IMDB]) is in charge. You mess with granddad’s friends, and you’re going wish you were dead. If you’re already dead, well, that’s just fine with Granddad.

The premise here – working class folks dealing with a zombie outbreak – is a good one and generally works. The only real issue is that there are actually two movie here, and only one of them is very good. The strongest, most interesting scenes are those where the old-folks are forced to deal with the situation on their own. In fact, Ford and his cronies could have easily carried the entire movie. It may have been a harder movie to pull off, but it could have been amazing.

The entire bank-job/rescue aspect was solid, but weak in comparison. We’ve seen so many groups of confused twenty-somethings fighting zombies it’s almost impossible not make it feel tired. It’s unclear if the goal was a laudable attempt to explore multi-generational reactions to insane pressure, or just an excuse to have younger people on screen. Don’t get me wrong: I have absolutely no problem with Michelle Ryan [IMDB] spending as much time on my screen as she likes, and she’s excellent as the only member of the gang with any real sense, but the movie still felt scatter-brained.

In spite of this, this is a solid, fun zombie romp that hits many of the right notes, even if there is a lot of mediocre to wade through to reach them. It’s worth the time for Alan Ford alone, although they take hero worship a bit too far in the end. Definitely recommended, if you set your expectations accordingly.