Posted by kiwidust on September 9, 2014
Posted in: Movies. Leave a Comment 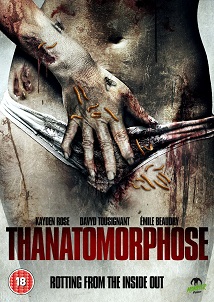 The description of this movie begins: “Thanatomorphose is an Hellenic word meaning the visible signs of an organism’s decomposition caused by death.” Personally, I think it’s a bad idea to name a movie something where you need comprehension of ancient Greek to understand it, but that could be just me. In any case, that’s what’s going on here: a young girl seems to be inexplicably decomposing without that pesky “dying first” part.

The movie has two huge technical problems that will probably be deal-breakers for most. Firstly, the entire thing looks to have been filmed by the light of a single 40-watt bulb in the next room. Many scenes are so completely muddy that you’ll have trouble picking out small details like refrigerators or double beds. Secondly, the camera work is of that skill-less, “artistic” variety normally reserved for Dockers commercials or student films. Everything is shot too close, with no framing or directional transitions and little depth of field.

If you can get past all of that you shouldn’t stumble too badly on the terrible acting and writing. Most of the actors clearly only speak English as a hobby, but there is, graciously, very little dialog. You should then be able to sail past the overbearing artistic flourishes, bizarre filters and heavy-handed score that riddle the rest of the movie. If you’re showing us a movie about a girl decomposing, showing us stock footage of animals decomposing is just, let’s say, “uninspired”. Presenting entire scenes using posterized, embossed video filters is just, let’s say, “stupid”.

After all that, there may be something to this, but if there is, it’s not for everybody. The unnamed girl’s metamorphosis is accompanied by increasing disgusting, often overtly sexualized moments. She spends almost the entire movie nude, although for much of the time she’s also covered in blood, feces and puss. One of the questionable saving graces here is that as the action gets more grotesque, the camera work gets even worse. Extreme, often blurry close-ups become the sole order of business. It’s also clear that a significant portion of the budget was set aside for the maggot wrangler. While this movie is unrated, it’s absolutely not for the kids, even the zombie loving ones.

The transformation and degradation aspect of this may have been a very effective demo reel or short-film. Stretching it out to feature-length, however, just resulted in a slow, jumbled mess. There could be a message and, obviously, the decomposition may be metaphorical for… just about anything, really. This is kind of film that four people will hate, but a fifth will laud endlessly as a perfect parable for their personal struggles with bicycle addiction. There’s likely something here for fans of disgusting, experimental horror as well. Obviously, it may also be a stretch calling this one a “zombie movie” but since I’m making the rules, I’m letting that slide.