Zombie of the Week: Fire Walkers

Posted by kiwidust on October 14, 2014
Posted in: Zombie of the Week. Leave a Comment 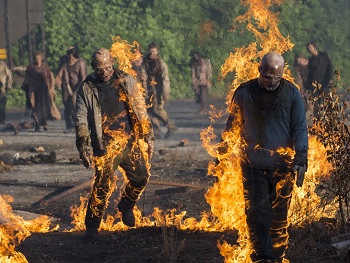 There were some great walkers in this episode, but with an entire herd to choose from we are faced with an embarrassment of riches. In the end, I simply hedged my bets and decided that instead of individual honors, a team achievement would be more appropriate.

So, Fire Walkers! Really, what could be better – or worse, depending on which side you’re on – than single-minded, shambling, flesh-rending zombies? Setting them on fire, of course! It’s like releasing plague rats into a city under siege. Only the rats are on fire and instead of quietly infecting your enemies with plague, they loudly set all your enemies on fire.

Truly, to get the job well and done (and well done), you need to set your walkers on fire.