Posted by kiwidust on January 12, 2015
Posted in: Movies. Leave a Comment 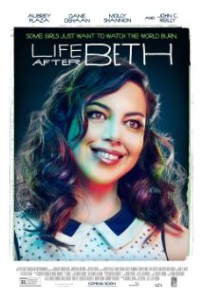 “Life After Beth” on IMDB

At this stage in the game any attempt at originality in the zombie genre gets points. Real originality, of course. Plopping zombies in a new location – a tanning salon! a brokerage firm! a library! – doesn’t cut it. You need to try harder than that. This does.

Beth (Aubrey Plaza [IMDB] playing herself, as usual) is dead. Her boyfriend Zach (Dane DeHaan [IMDB]) is shattered. That is, at least, until he drops by to visit her parents and finds her wandering around the house. Other than being a little muddled, her funeral doesn’t seem to have slowed her down much. Her parents think it’s a miracle. He’s not going to argue; especially since she can’t seem to remember that she had dumped him the day she died.

She’s also decided that she’s most comfortable in the attic and loves smooth jazz. She doesn’t seem to feel pain, has freakish strength and violent mood swings. Zach tries to take things in stride, but it’s difficult to pretend that this is the same Beth he knew and loved. It’s also difficult to ignore that there’s something odd going on in general when other previously deceased people start popping up. As Beth, and the situation in general, degrade further, it becomes impossible.

The conceit is undeniably interesting: zombies are the reanimated recent dead but, at least for a little while, they’re basically themselves. They have some memory lapses and minor quirks, but aren’t something to be automatically feared. Once the rot and the hunger sets in they get more… “traditional”, but until then they may very well be considered a blessing.

The idea is original (at least as far as I know) and executed well, but the overall story has a slow unevenness that undermines it. It meanders through multiple genres without committing enough to any of them. The audience is unable to find comfortable footing and, in turn, means that many of the gags and emotional touch points fall flat.

Even if it’s just not enough of a horror movie… or a comedy… or a romance… to truly stand out, there’s still a lot to like. The A-list cast (or, maybe, “A minus” list) is excellent and do the best with what they have. A good budget goes a long way in a landscape of no-budget mediocrity. The ideas are fun and implemented with a minimum of cliche. It may sputter out at the end, but at least you passed some interesting scenery on the trip.