Random Thoughts on The Walking Dead, “What Happened and What’s Going On”

Posted by kiwidust on February 12, 2015
Posted in: Televison. Leave a Comment 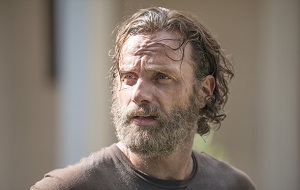 Here are a few random thoughts on The Walking Dead episode 509, “What Happened and What’s Going On“.

We just lost Beth like eight minutes ago, and now Tyreese. More importantly as completely dumbass as Beth’s death was, Tyreese’s is even more dumbassier! I’ll get into that in a minute, but really: this is getting ridiculous, people. More importantly now is the more basic question: why do people keep dying just when they’re getting really interesting?

Tyreese spent much of his time on the show as a kind of good-natured, go-along guy. A solid rank-and-filer, but not a particularly interesting one. With this season, and his forced assumption of the role of baby Judith’s protector, he truly started to grow. The evolution of his relative pacifism cast a reflection on the aggressive, violent pragmatism of the rest of the group. This culminated in the spiritual, almost ritualized way that he aided Sasha with Bob’s death.

This, I thought, is getting interesting! In Tyreese we have, perhaps, a new kind of spiritual leader. One that accepts the reality of the new world and provides moral guidance and practical relief for those in grief. I hoped to see Tyreese’s informal, gentle example contrasted starkly with Gabriel’s inability to reconcile his formal, traditional beliefs with the advent of  the zombie apocalypse. Would Tyreese become the strong, gentle soul that took on the burden of death for his group when needed?

Nope. Tyreese was bitten by a zombie that he knew was there because he was staring at pictures.

Tyreese’s death was stupid and disappointing. He knew the house was infested, he saw the zombie in the other room, yet he still went into the other room and stood with his unprotected back to the door. I stress “unprotected” because, even after three years of this, our heroes still don’t take even the most basic of precautions.

As we’ve seen nearly all zombie bites are to the neck/shoulder and forearm. Why are our people still wandering around known dangerous areas in tank tops and jeans? A simple leather jacket would provide significant protection from bites. Football or hockey gear – likely in vast supply at any number of abandoned sporting goods stores – would provide even more. Hell, something as simple as duct-taping magazines to his forearms before entering infested areas would have saved Tyreese.

While we’re on the topic: why are our scavengers still so utterly unprepared for scavenging? Why doesn’t each of them have, at least, a small backpack with basic gear? Those same sporting goods stores would have any number of high-end, versatile backpacks, satchels, hydration packs, ponchos, rope, extra shoelaces and whatever else the survivor on the go could need. Why are they still grabbing trash bags (let me remind you, fragile, noisy trash bags) to collect their salvage?

On a positive note, the episode was undeniably gorgeous. Seeing the ragtag collection of ghosts was great fun. The episode might have gotten a little bit artistically self-indulgent, but Tyreese absolutely deserved the grand send-off.

I’d like to hope that things will settle down, at least a bit, with our ever dwindling group, but I doubt that’s going to happen. The description of Noah’s home was clearly designed to raise visions of Alexandria in the minds of the comic fans. Seeing it overrun and gutted in what was clearly a premeditated attack is definitely foreshadowing something important coming. Something named Negan, perhaps?

I’m betting so, and I’m betting things are going to get worse for our heroes before they get better.