Cornell Tells us How Screwed we Are

As reported by the amazing IFLScience.com in “Mathematicians Work Out Zombie Apocalypse Plan“, graduate students at Cornell have taken to using (they say) fictitious parameters based on zombie outbreaks to model epidemiological forecasts of transmission and control. Not only is the team applying significant scientific rigor to the experiment, they’re also performing their simulations on a huge scale: like the entirety of the United States and all of it’s 300 million people. 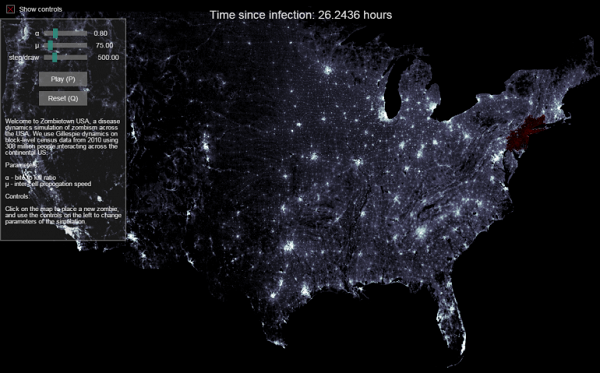 Alex Alemi, a Ph.D. physics student has led the work and his news is mixed but generally, as you might expect, not good. Hollywood, it seems, has the basics but misses, as it often does, in the details. In traditional circumstances, it seems like cities would become overrun quickly along well-established transportation routes. However rural areas could stay infection free for weeks or even months. Truly isolated areas are even more secure and, it turns out, the safest place in the U.S. would appear to be the northern rocky mountains.

Obviously Alemi claims that his work isn’t targetted at actual zombie outbreaks. We choose to believe him, for now. Instead, effort is to test existing and modified modeling techniques to improve their quality.

One comment on “Cornell Tells us How Screwed we Are”