Deadite of the Week: Cheryl Williams

Posted by kiwidust on September 13, 2015
Posted in: Zombie of the Week. Leave a Comment 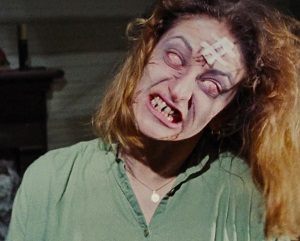 To celebrate the imminent arrival of Ash vs Evil Dead, Zombie of the Week has been overrun by Deadites! We’re going to bring you our favorite Deadites from across the franchise running up to the Halloween premier!

First up, naturally, is the first up; the first Deadite we ever see in the original The Evil Dead. Cheryl is Ash’s sister and the only family of his we’ve seen. She was a shy artist going to Michigan State and was hoping for a quiet weekend in the country. That hope was dashed by a malevolent force that drew her out, raped her with possessed shrubbery and turned her into a demon zombie.

The actress who played Cheryl, Ellen Sandweiss, had to put up with a lot on set. Most of her non-demonic lines were cut, she spent much of her time in painful contact lenses squatting in a freezing hole (the cabin where filming took place didn’t have a cellar, so a trapdoor was installed over a hole in the ground) or getting mauled by twigs. Reportedly she earned $800 for the role.

This is the 128th Zombie of the Week; that’s over two years of zombies! We are desperately running out of ideas! Please contact us with suggestions!