Zombie of the Week: Captain Zao

Posted by kiwidust on February 28, 2016
Posted in: Zombie of the Week. Leave a Comment 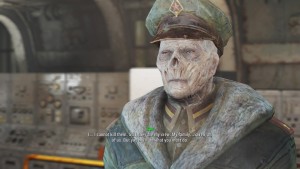 We’ve been playing Fallout 4 on the PlayStation 4 since its release on November 10th (you can follow our playthrough diary at our sister site, DepressedPress.com). We celebrated its new, more aggressive ghouls a few days later on November 15th. But what about the many interesting ghouls that don’t want to immediately chew your face off? This series is for them!

As you’re wandering down by the Boston waterfront, you might find a weirdly unaccompanied child amongst the super-mutants and raiders. Although you can spot at least three things that would kill him instantly within 50 feet, he seems more worried about a “sea monster” that’s peeping at him from out in the bay. If you agree to go investigate, you’ll be surprised to find a 200 year-old Chinese submarine.

If you board the relic, you’ll be even more surprised to find another relic: the 200 year-old Captain Zao! Despite the fact that he, you know, was the one directly responsible for nuking your hometown, he’s really not that bad a guy. Why not give him a hand with some fetch quests?

This is the 152th Zombie of the Week; that’s nearly three years of zombies! We are desperately running out of ideas! Please contact us with suggestions!