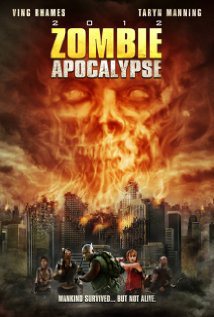 This is the second selection in our annual “Boiled Eggs and Brain Eaters” Easter zombie movie marathon.  It’s becoming something of a mini-tradition to have Ving Rhames featured in a selection – if he remains true to form we’ll have a new option next year as well.

Any genre fan knows that “SyFy Original”  means a small collection of B-now-C-list actors interacting with terribly realized CGI effects.  This doesn’t change the formula but, unlike the majority of its siblings, features a surprisingly cogent script and (in comparison) quality performances.

We follow a group of survivors attempting to reach the safety of a quarantined island off the coast of California.  Much of the script deals with the survival techniques of the group and the growing pack-mentality of the zombies.  None of these side-threads ever overshadow the main focus.

The movie suffers most from the effects.  Horrible (but I have to assume very cheap) computer effects are used terribly in many places that would have benefited greatly from practical effects.  A computer generated sword cutting a throat or thrusting through a neck just looks wrong.  Terribly, terribly wrong.  The smallest of handguns produce explosive decapitations and gouts of blood added post production have no impact on the characters or the environment.  In all it just looks really stupid.

That being a given for a SyFy Original the movie isn’t actually that bad in total.  While it may seem like damning with faint praise producing a truly average movie is quite the accomplishment for SyFy productions.  There are better (much better) zombie movies available but as a diversion this is inoffensive enough.