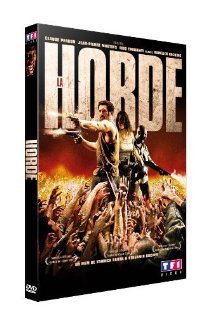 “The Horde” on IMDB

This is the fourth selection in our annual “Boiled Eggs and Brain Eaters” Easter zombie movie marathon.  Since my daughter (who lacks the patience for subtitles) had a previous appointment my son and I decided to give this foreign example of the genre a go.

The French may have (or so I’ve heard) some issues with social graces but apparently no problems at all with crafting a truly kick-ass zombie flick.  This is a prime example of a straight-laced traditional zombie story.

A group of cops decide to take matters into their own hands after a crime boss kills one of their own.  They infiltrate his hideout, situated at the top of a condemned high-rise, to assassinate him but things go pear-shaped.   As the situation heats up the dead start to rise and attack the living and our two groups are forced to work together.

The group, nurturing a very uneasy truce, is navigates through the dilapidated building fighting off the horde promised in the title.  The zombies are fast and vicious and so are the protagonists.  Several of the extended battle sequences can be noted for the sheer, crippling brutality (some aspects of which are called out specifically in the script).

In what’s becoming a more popular choice no background is given on the cause or mechanics of the zombie uprising.  The audience is thrown into the story with as much background as the characters which both allows us to empathize more with them and increases the suspense.  Very little time is spent on exposition or discovery.  The movie knows its audience and wastes no effort repeating details.

There are no new ideas here but doing a well-worn concept exceedingly well is still worthy of praise.  Some people may be turned off by the subtitles that would be a shame.  This is a high-quality, well constructed zombie movie suitable for the most discerning genre fan and rivaling the best provided by American film-makers.