Zombie of the Week: Inspector Clay

Posted by kiwidust on March 23, 2013
Posted in: Zombie of the Week. Leave a Comment 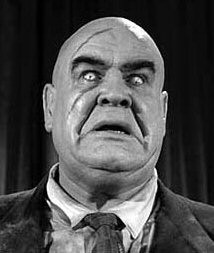 Inspector Clay worked his stubby fingers to the bone to protect, um – wherever the hell he worked – until the day that he died tragically off-camera in a horribly lit cardboard graveyard.  Then an effeminate alien shot long distance electrodes into his pineal and pituitary glands and raised him as the lovable zombie tool of destruction that we’ve come to know and love.

“Plan 9 from Outer Space” wasn’t the first Zombie movie and it certainly wasn’t one of the best but it did bring us a clumsy, shambling, incoherent Tor Johnson as Inspector Clay.  Later he put in some white contacts and became a zombie.

As the Inspector’s good friend John Harper reminds us: “One thing’s sure. Inspector Clay is dead, murdered, and somebody’s responsible.”