Random Thoughts on The Walking Dead, “This Sorrowful Life” 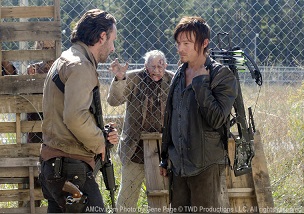 Here are a few random thoughts on The Walking Dead episode 315, “This Sorrowful Life“.

Glen redefined the whole idea of “shopping”.  Sure you may not want to do this for everything (or anything absorbent) but for jewelry, belts and maybe even shoes – why not?  It was cool to see this almost parenthetical pragmatism.

Also, did you see the size of the rock?!  It was freakin’ enormous!  I remember scrimping for months to spend over $700 for a flea-sized speck of light for my lovely bride 20 years ago.  Glen either lucked the hell out or that’s a big fat fake.

I can barely use my car keys while holding my laptop bag yet Merle can hotwire a car with one paw, a dagger-hand and his yellow-teeth?  The car itself was also odd; they clearly wanted to pick something so old that it would be hot-wirable but by doing that they also picked something that would never, ever have a car alarm on it.  Wasn’t a big fan of this scene.

Tangent: it’s been almost two years now, right?  Why do these cars even still run?  Granted Georgia winters are milder than we have in the northeast but I can’t leave my (newish) car unstarted for a couple months without the battery dying.

Why are our heroes even fighting for the prison?  It’s, let’s face it, a shithole.  Apparently people and walkers can get in and out through the tombs whenever they like, they’ve still only truly cleared a tiny corner and there are no apparent resources worth defending.  So why bother at all?

The prison just isn’t worth it.  Go back and live with Morgan.  He really seemed to have things under control.

Norman Reedus is a great actor.  I can’t see anybody else as Daryl.  He also looks really weird when he cries.

So there are some random thoughts on this excellent episode!  Next week we’ll see what happens in the season finale.  My prediction is that not nearly as much as we’re hoping to get settled will get settled.

2 comments on “Random Thoughts on The Walking Dead, “This Sorrowful Life””