BEBE 2013: Even More Movies and Some Poetry! 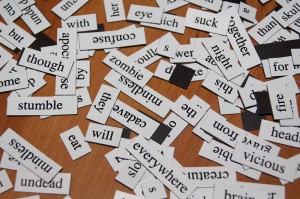 More BEBE 2013!  The fourth selection, Zombie Diaries 2, wasn’t too bad.  Like most “found-footage” films it had a tendency to collapse under its own weight after a while.  Nobody in their right mind would continue to film during that and just how long do those batteries last?!  We also knocked a fifth movie off, War of the Dead.  It was fair but muddled as hell.  A fusion of classic World War II and action zombie movies set on the Finnish/Russian border in 1939 it, too, kind of crushed itself under its own seriousness.

Other than that we’ve been doing some zombie poetry using the Zombie Magnetic Poetry kit.  My Daughter especially has been enamored with this even if she currently lacks the attention span to do anything more than a few lines. 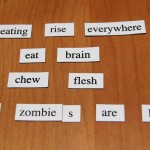 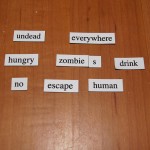 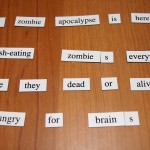 The zombie apocalypse is here flesh-eating zombies everywhere are they dead or alive hungry for brains.

OK, so none of those are masterpieces.  She’s still plugging away!