Zombie of the Week: Ed

Posted by kiwidust on April 6, 2013
Posted in: Zombie of the Week. Leave a Comment 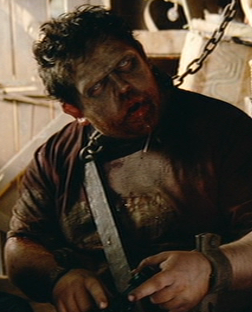 [Apologies for the delay in posting recently.  As we hope you’re unaware there is a biblical, extinction-level stomach flu making the rounds here in the US.  Details would be inappropriate but we sincerely hope that you are indeed, and remain, unaware. ]

We’ve said it before (and we’ll continue to say it long after you find it annoying) but Shaun of the Dead is the perfect zombie film.  One of the many reasons for this is Ed.

Ed might be a boorish, insufferable clod unable to grasp the gravity of the situation.  He may also be a self-centered ass who blithely ignores how his actions negatively impact those around him.  Those that truly know him realize, deep in their hearts, that he’s also lazy and dirty.

(Fun IMDB fact: Ed was played by Nick Frost.  To create a genuine need for Ed to scratch himself inappropriately he allegedly shaved his genitals for the filming.)

Zombie Ed, thus, is an improvement over the original in almost every way.  He really hasn’t changed much but nobody minds that you keep him chained in the shed and off the sofa.