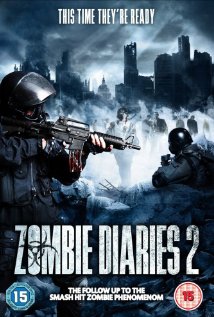 Three months ago zombies overran much of the world.  In the UK we’re introduced to Jonesy, a military documentarian trying to maintain a record of events.  He, his fellow soldiers and a handful of civilians survive, barely, within a lightly fortified military barracks.  One night, when their haven is overrun, he and a small group of survivors are forced to strike out toward the coast and a vague hope of rescue.

Like all found-footage movies this one has a tendency to collapse under the premise long before the end.  Jonesy’s camera has supernatural battery life and a nearly sentient ability to maintain subject focus even while running.  These can be forgiven pretty easily but the character decisions are harder to rationalize.  When your hero’s group of five is facing a field of dozens of zombies that must be crossed on foot and he keeps taping, you lose empathy damn quickly.

The script is completely straight and serious but unfortunately ham-fisted in places.  It’s dark, depressing and doesn’t have anything really good to say about humanity’s prospects.  The acting is uneven at best but the terse script doesn’t push anybody hard enough to make it a significant problem.  A warning: this one is definitely not for the kids.  There are several brutal scenes including an extended rape/murder sequence that’s not for the faint of heart.

The found footage sequences are broken up by brief flashbacks – and are ultimately discarded altogether – but they get more unbelievable as time moves on.  They ironically distract you from the narrative that the device is supposed to pull you into.  Most of the action (likely due to the budget) is rather small in scope but is punctuated by a few decent set-pieces.  Overall, this is a thoroughly mediocre movie but one that you may be surprised to find yourself liking depending on how forgiving you are of its flaws.