Zombie of the Week: Headcrab Zombie

Posted by kiwidust on April 13, 2013
Posted in: Zombie of the Week. Leave a Comment 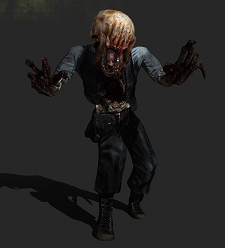 While it’s not a traditional zombie, none can deny that Valve’s alien head-hugging monstrosity deserves a position of honor at the table of the wandering dead.  Few creations have been so thoroughly effective in so many roles as the humble headcrab.  Beginning in Half-Life as a bloated, scuttling, shadow-loving nuisance enemy it only took a befuddled scientist or an under-trained security guard to transform it into a walking nightmare.

Inflicting its host with hideous mutations the resulting zombie grew enormous, skinless claws and a terrible, gaping groin-to-gullet vertical maw.  Leveraging those  with a bloodlust and terrible brutality the zombie would literally tear its victims to pieces.

Upping the ante in Half-Life 2 we experienced new variations on the theme with the grenade-wielding zombine, the flayed fast zombie and the devastating poison zombie.  We were also introduced to the diabolical ingenuity of the Combine and its population-erasing headcrab-infused bombing campaigns.  Already effective with the (now) primitive graphics of the first game Half-Life 2 also upped the visual ante making playing in the dark a serious challenge.

Many of the best gameplay experiences and one of the worst nightmares of my adult life featured the headcrab zombie.  So here’s to you, you shambling, flesh-ripping, parasite-controlled terror.