Zombie of the Week: Solomon Grundy

Posted by kiwidust on April 22, 2013
Posted in: Zombie of the Week. Leave a Comment 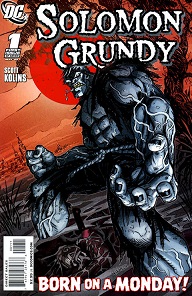 This week we celebrate a really old school zombie, the always diabolical Solomon Grundy!  The character was introduced in 1944, almost 70 years ago, in All-American Comics #61.  Although introduced as a foil for the Golden Age Green Lantern he was so popular that he found his way into almost every major book including Batman, Swamp Thing and Superman.

Further cementing the character as awesome is the fact that he’s based on a supremely twisted 19th century children’s rhyme:

Born on a Monday,

That was the end,

What’s not to love about a super-villainous reanimated corpse based on a mad children’s chant about death?  Nothing!