Zombie of the Week: Cemetery Zombie

Posted by kiwidust on April 27, 2013
Posted in: Zombie of the Week. Leave a Comment 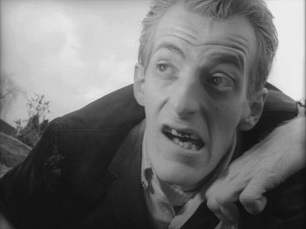 The cemetery zombie, played by Bill Hinzman, is the first zombie we see in the 1968 classic “Night of the Living Dead“.  George Romero’s classic single-handedly defined the modern zombie genre while scaring the living crap out of audiences unprepared for it.

The cemetery zombie was doubly troubling being the resurrected corpse of an executed child-killer.  Escaping when his coffin was open to allow his victim’s family to confirm his death he  sets off the chain of events that throw our heroes, Barbara and Ben and the rest, together.

Sure cemetery zombie is quickly overshadowed by the rest of the horde but he’ll always have a special place in our hearts.  Even if he’d prefer to rip them out and feast on them still-beating.