Review: In the Flesh 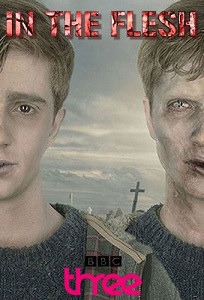 “In the Flesh” on BBC

The popularity of Zombies has good and bad points.  To the negative, anything popular results in a deluge of copycats and wannabes and zombies have much more than their fair share of cookie-cutter movies, comics and (dare I say it?) blogs trying to cash in on the fad.  The pile of dreck is mountainous and sifting through it to find the gems can be dismaying.

To the positive, once a topic becomes as mined as this one is when the really interesting stuff starts to show up.  The stuff that makes you think about old ideas in a new way.  An audience avid for more material means that these interesting, experimental ideas are able to get funding and support and each success makes it easier for the next.

This feature length mini-series (three hour-long episodes) explores the aftermath of a zombie outbreak.  The backstory is completely traditional: the recently dead crawled out of their graves by the thousands and nearly destroyed humanity as we know it.  Only through the valiant efforts of the paramilitary HVF (Human Volunteer Force) was the tide turned allowing researchers enough time to create a cure (of sorts) for the disease.

Now considered sufferers of Partially Deceased Syndrome (PDS) the former zombies require daily injections to prevent a return to their “rabid” state.  They’ve spent months in therapy before the government attempts to reintegrate them back into a society that still fears and hates them.  Walls and bridges are splashed with “Beware of Rotters!” and the HVF still patrols regularly.  Contacts and makeup can hide the outward signs but their inability to eat normal food or heal wounds means that they can never really truly fit in.

We focus on Kieren Walker who returns home to parents insistent on acting like nothing has happened and a younger sister who spent the past few years hunting people like him.  The local vicar preaches that the arisen dead are Satan’s tools and unredeemable.  The government reintegration programs are ineffective, overwhelmed and resented by the locals that would rather see the rotters put down.

Within this framework the narrative treads heavily on the obvious themes of ostracism, guilt and acceptance; both on personal and a societal levels.  There are also intriguing subplots of how “community” is defined in the face of such a definitional crisis, multiple levels of loyalty and the responsibility of those who can remember doing evil but were unable to stop.  Throughout the entire affair is woven a continuing thread of redemption and unusual second chances.

The presentation suffers, just a little, from a lack of focus.  By squeezing so much into the story they’re forced to cut some threads short.  To their credit any one of these is deep enough to support another mini-series.  I would love to see more about the “natural” zombie commune hinted at, the issues with physical relationships and the somewhat dead or an extension of the religious issues touched on.  The world they’ve constructed is so rich that I deeply hope that we see more of it.