Movie Review: War of the Dead 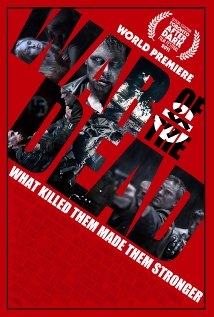 “War of the Dead” on IMDB

This was a selection for Boiled Eggs and Brain Eaters 2013.   Both kids wandered away during it if that’s not too much foreshadowing.

I was looking for forward to this.  If there’s one thing that zombies do well, it’s infect others; in this case other genres.  I love World War II movies.   There’s an attractive simplicity to a conflict where everybody can agree who the bad-guys are.

The movie’s premise was more than a little needlessly confusing (I think this is what sent the kids scurrying away).  To simplify, a group of American and Finnish soldiers are sent on a mission to infiltrate a Russian research base run by Germans.  There’s a lot of weird nationalism at work that does quite a bit to muddy the water.  When they get there they find an enemy that’s stronger, faster and more ruthless than any they’ve ever met.

The movie covers the basics fairly well.  The acting is decent, for the budget, even if the actors can’t really support the many accents the script demands.  The script is wonky but not, I think, truly broken in any meaningful way even if the overarching ideas are clearly half-baked.  The cinematography is surprisingly good when the choppy editing allows it to be seen.

The core issue with the film is that the it fails to find a way to blend the multiple genres and, instead, seems to highlight the worst aspects of each.  The movie is vastly more “war movie” than “zombie” with its multiple gun battles and over-the-top action sequences.  These are all filmed in the dimmest of light with the moody cuts and odd camera angles of a zombie feature.  The styles conflict more than merge deflating the momentum from both.

I might also complain that the ending was more than a little drawn out and inscrutable but to be honest I had kind of lost interest by then.  Despite all of that I still think I have to recommend this one.  It really does have a lot going for it, at least compared to other options in the genre, and I could easily see my negative experience being in the minority.

One comment on “Movie Review: War of the Dead”