Zombie of the Week: Well Zombie

Posted by kiwidust on June 23, 2013
Posted in: Zombie of the Week. Leave a Comment 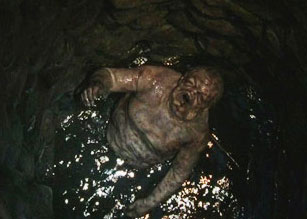 The Walking Dead has featured many iconic zombies but few are as memorable as the well zombie from the episode, “Cherokee Rose”.  Our survivors, still in an uneasy truce with Hershel, attempt to make themselves useful on the farm.  They discover a surprise in one of his wells: the bloated, beaten corpse of one of his neighbors.

Trying to get the unwanted corpse out involved a nerve-wracking sequence featuring poor Glen dangling like a worm on a hook over the snapping zombie, some decisive action from T-Dog and one of the most gruesome effects ever seen on TV.  It also ruined a perfectly good well.

The zombie was even made into a an action figure in the second series of “Walking Dead” figures from McFarlane Toys.  A perfect stocking-stuffer if ever there was one.