Zombie of the Week: Rain

Posted by kiwidust on July 9, 2013
Posted in: Zombie of the Week. Leave a Comment 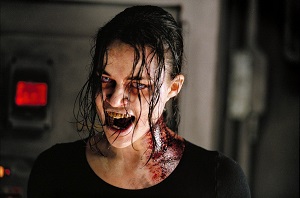 Since we celebrated the first T-Virus zombie from Resident Evil last week I thought it would be nice to feature one of the more memorable zombies from the film adaptation (one of the few truly decent video-game movies ever made).

Michelle Rodriguez, playing the role of Michelle Rodriguez, features in the film as one of the last survivors of the special tactical team sent to investigate the disaster at the secret, underground research facility.  She also, hands down, gets the most shit of anybody.

Rain went through hell to entertain us.  For that we celebrate her.