Zombie of the Week: Evil Ash 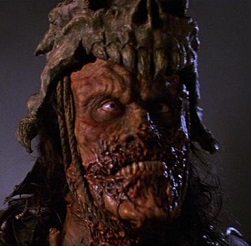 Evil Ash started out as a mirror homunculus who was split into many tiny duplicates then swallowed by Ash.  From inside he grew, like a boil or wart, from Ash’s shoulder and finally split off to explore a life of his own.  A short life, as it turned out, because he immediately proceeded to make the grave mistake of royally pissing off Ash who blew most of his face off with a shotgun.

Shortly after a surprisingly decent burial he had an even more surprising resurrection.  This was, of course, Ash’s fault.  When Ash fails to retrieve the Necronomicon Ex-Mortis correctly an unrelenting army of the undead rises from their graves.  Evil Ash, now Zombie Evil Ash, installs himself as general.

“Army of Darkness” is hands down one of the most original, clever and just pure fun movies ever made.  While it can be argued that it’s not really a zombie movie it’s actually quite difficult to pin down what it is.  A comedy?  Horror?  Parody?  Fantasy?  Sure: it’s all those things and more.

So this week let’s all give Evil Ash just a little sugar, eh?

One comment on “Zombie of the Week: Evil Ash”