Posted by kiwidust on September 3, 2013
Posted in: Zombie of the Week. Leave a Comment 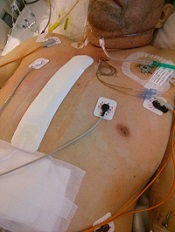 As we’ve made clear in the past, we gleefully consider anybody that’s been resuscitated by medical science to be at least an honorary zombie.  Unfortunately we were able to witness this first-hand recently when grandpa up and decided to have himself a heart-attack.

Luckily he made it to the hospital on time. Unluckily he ended up requiring a triple coronary artery bypass graft.  Doctor’s opened him from neck to navel, stopped his heart, pulled some spare parts from his leg, bolted them on and then closed him up.  All of this (plus, as you can see, the tubes, electrodes and monitors) push him handily into the prestigious cyborg-zombie category.

That was three days ago.  He’s doing great, has been moved out of the ICU and is currently free of all visible cybernetic enhancement (but we know they’re in there).  Barring complications he’ll be home in a day or two.  My mother promises to watch closely for any tell-tale moaning, shambling or odd-cortex-shaped-cravings.

Sure, someday science may cover the globe in ravenous, cannibalistic, reanimated corpses.  We’ll probably be a little annoyed with it then.  Right now it saved my dad and my kid’s grandpa.  Right now, science is just aces with us.