Zombie of the Week: Rob Zombie

Posted by kiwidust on October 7, 2013
Posted in: Zombie of the Week. Leave a Comment 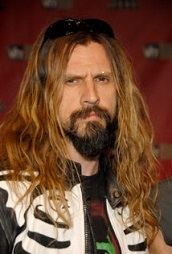 We continue to expand our ever loosening definition of “Zombie” with this week’s entry.  Rob Zombie is the writer/director of the cult-classic, “House of a Thousand Corpses“,  a founding member of the legendary heavy-metal band, “White Zombie” and resident of Woodbury, CT!

(That last one may not, in fact, be as kick-ass-death-metal as it sounds.)

Zombie has been a melting pot of horror, stagemanship and insanity his entire career.  Oddly enough he has yet to take on an actual zombie project (although several come damn close).  His experience with horror movies mirrors my own (and is one of the reasons that, in my old age, I tend to watch them at home):

“For some reason, horror movies, they seem like good date movies. When you go to them it’s all high school kids, all over each other, running up and down the isles, no one is even looking at the screen anyways, they figure they don’t have to pay attention to the story anyways. We scream and yell… it’s like mayhem.”

So, Rob Zombie, for continuing to the blur lines of horror in film and music and, not so incidentally, having the last name “Zombie”: we salute you!