Zombie of the Week: Swinger Zombie

Posted by kiwidust on October 15, 2013
Posted in: Zombie of the Week. Leave a Comment 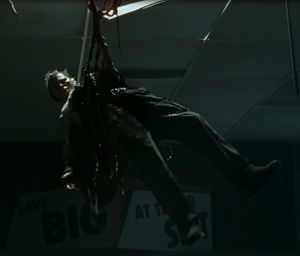 The Walking Dead season four premier was relatively quiet, but it did have its moments as when the survivors make a supply run to a grocery store.  They set themselves up for hilarity (and, yes, horror) when they fail to notice that the roof was the both the site of a helicopter crash and home to a gaggle of  walkers.

Attracted to the noise of the scavenging the formerly dormant walkers converge on a weak point of the roof and our friend pictured does a little trapeze act with his entrails.  He swings, he groans, he spins and twirls… until the rotting tripe hold him aloft tears and he plummets the remaining distance with a “splat”.  Swinger Zombie never works with a net, folks!

For zombies there’s only one answer to “would you jump off the roof just because your friend did it?”  That answer is a strangled moan as they jump off the roof.  That’s exactly what we get as all of Swinger Zombie’s buddies follow his lead (at least the “splat” part of it).