Posted by kiwidust on November 10, 2013
Posted in: Televison. Leave a Comment 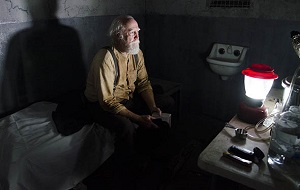 Here are a few random thoughts on The Walking Dead episode 405, “Internment“.

The group still seems to have some trouble with contingency planning.  It was clear that Herschel was keeping the afflicted people in their cells, but why not a simple “one cell open at a time” rule to prevent exactly what happened?  The scene did clear out most of those pesky no-names, but it still seemed completely preventable.

Near the end, when the mini-van is approaching and Carl, relieved, states: “It’s going to be all right,” how does he know?  They have no idea who’s in that van.  I would have loved seeing a “shave and a haircut” signal from the headlights.  It wouldn’t have cost anything, but would have both made Carl’s confidence understandable and shown that they planned for exactly that issue.

On the positive side,  Scott Wilson’s (Herschel) performance here was a clear Emmy contender.  It was clear, laser-focused and incredibly subtle.  Watch his facial expression as he draws the walkers away from Lizzy simply to spare her from watching him kill them.  Amazing.

Loved this whole segment.  People often underestimate the sheer force that a crowd of bodies can exert.  Fences primarily designed to thwart random escapees couldn’t hope to hold up to that kind of concerted, unrelenting pressure.  It underscores the fragility of their safety perfectly.

Another concept that this reinforces is the absolute requirement of having a large enough group to manage the area that you want to inhabit.  The prison simply couldn’t be managed by a small group; there’s too much maintenance, too much ground to cover.   When the sickness took the number of able-bodied survivors to a certain level the fences became impossible to defend properly.

The evolution of Rick’s dependency on Carl was another highlight of the sequence.  That this camaraderie continued the next morning with the shared taste of their first crop made me optimistic that this was a real, permanent advancement in their relationship.

… and I’m kind of annoyed at that.  I feel that they gave the governor more than his due last season and am not sure that the character has much more to offer.  They already advanced the character well beyond the more simplistic rendition that existed in the comics.  Closure is nice, but it’s not a necessity and I can’t help but think this will be a step backward.  I would have much rather left him relegated to the past like some mythical boogieman.

I want to at least mention Lizzy; crazy, little, creepy Lizzy.  I’m more convinced than ever that she is the pied-piper at the fence with the rats after seeing her little game of tag with the respirator zombie.  Watching her amuse herself in the puddle of mucus and blood completely cemented her “freak” status.

I’d just like to close by saying that Maggie was absolutely, straight-up bad-ass.  I can’t wait to see how Daryl reacts to Rick’s news about Carol next week!