Zombie of the Week: Chanukah Zombie

Posted by kiwidust on November 23, 2013
Posted in: Zombie of the Week. Leave a Comment 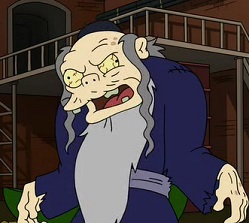 Along with his good friends Robot Santa and Kwanzaa-bot the Chanukah Zombie is the (non) living embodiment of his particular holiday season. There’s not much known about this reclusive bringer of… whatever gets brung on Chanukah.  (As atheists we’re pretty unclear on most of this stuff, honestly… but we did hear there’s lots of food. We can get behind that.) The ever-helpful Futurama Infosphere does have some interesting tidbits, however:

When you begin to either reverently celebrate or utterly ignore Chanukah this year, please give a thought to the hardworking, and slightly deranged, Chanukah Zombie.