Zombie of the Week: Clickers

Posted by kiwidust on December 22, 2013
Posted in: Zombie of the Week. 1 comment 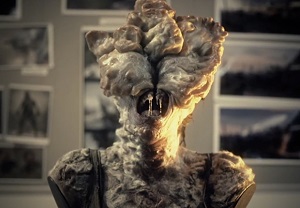 I’ve written pretty extensively several times about “The Last of Us”. You might say that I kinda liked it.

The game presents an apocalyptic scenario in which an aggressive , behavior altering strain of Cordyceps fungi (which is a real thing: read about it if you’d rather not sleep tonight) wipes out most of humanity.

When first infected, people become mindless, violent, rampaging terrors that will tear apart anybody they meet. After years of infection, when the fungus has blossomed forth from the center of the victims brain (again, a real thing) and destroyed their sight they become clickers.

Clickers are ambush hunters. Hiding in corners while using their ears and echo location to jump out and make you crap your pants. Then they kill you. Horribly. With teeth. To add to the creepiness they’re almost always presented as female and still wearing the tattered remains of what was likely a very smart ensemble. They’re also amazing strong and, at least for short bursts, fast.

Clickers are the kind of critter than crawls into your brain while you’re playing the game and then decide to come out and play while you’re sleeping. So while you’re opening presents this Christmas (or going to be movies or getting Chinese food or whatever you like to do) why not spend a moment to give thanks that Cordyceps (which is still a totally real thing), so far at least, has stuck with insect and arthropods.