Posted by kiwidust on February 9, 2014
Posted in: Zombie of the Week. Leave a Comment 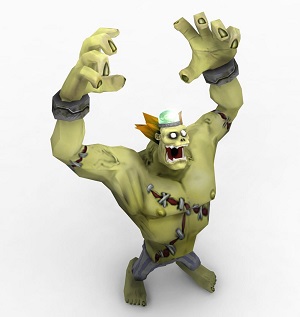 Our celebration of the the PS3 classic, Burn Zombie Burn Month, continues with the powerful, ginger-haired, dome-skulled, science-experiment-that-should-never-have-been, Super Zombie!

These hulking menaces can sometimes be blessings in disguise. They’re far from discriminate and will gleefully rid the arena of other zombies as well as hapless players. This can come in especially handy when weapons are low and the area is teeming with melee-adverse noxious or exploder zombies. Still, don’t goof around too much because sooner or later they will have your number.

Considering that you may not want to use the surprisingly effective tactic of attacking them with mechanized melee weapons, like the chainsaw or lawnmower, from behind. If not, you can also blow them up with TNT, which is effective but does have certain explodey risks as well.