Random Thoughts on The Walking Dead, “A”

Posted by kiwidust on March 31, 2014
Posted in: Televison. Leave a Comment 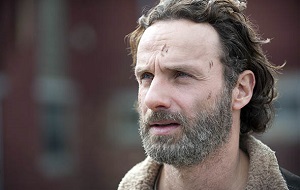 Here are a few random thoughts on The Walking Dead episode 416, “A“. This is the season finale so expect the worst!

Joe’s group turned out to be exactly the kind of scum that we all knew they would be. Daryl also turned out to be exactly the quality of person that we knew he was. So while everything worked out as expected, I was still disappointed in the whole sequence. It felt rushed and perfunctory. We’ve enjoyed so many slow, deeply detailed stories lately; seeing the entire climax of Daryl’s return to the group be over in a brief few minutes made me feel a little cheated.

The flashbacks explained how Herschel finally convinced Rick to stand down and consider the quality of his future. The events of the episode all conspired to push him back into here-and-now survival mode; back to his more primal self. Through Joe’s death the audience is being told: Rick is willing to do anything to protect his family.

Still, I would have liked to see more of Joe’s special brand of “order”.

Mary’s Stew is People! It’s Made of People!

I realize that we haven’t yet confirmed that Terminus is, as I predicted, full of post-apocalyptic, person-pie-preparing, people-eaters, but I’m much more confident of that idea now. All of the early references to the scarcity of food were a veiled reference to it. During the chase sequence we see one area covered in picked-clean skeletons. One of them said, “new people make them stronger”! These folks are crazy cannibals! They love the man-meat! They know how to roast the long pig!

Although the timelines of each group is jumbled I half-expected, after the chase, to see Tyreese and Carol looking down on the excitement from a distance. It would make sense for them to have been the slowest of the groups considering the children and the layover at the grove. I’m still holding out hope for this. I think it would present a great and interesting challenge: how do two people, charged with an infant, help their friends in this situation? Can they? Should they?

Instead, however, I saw two hints given that they had already been captured. One was a fleeting moment in the chase scene when we heard cries of “help” from another train car, the other was when Rick, rather pointedly, noticed the discarded powdered milk wrapper on the ground before the prison car. My guess, nothing more, is that the Termites (as apparently we’re calling them) will have adopted Judith and so, even if our group escapes, they will be forced to return.

Finally, open question: in the shrine that Rick and the group passed through: are the names on the floor those that the Termites have eaten or those that they’ve lost to push them to this? Is it a memorial to what they’ve been forced to do or what pushes them to keep doing it?

In addition to the question about Carol and Tyreese I was surprised that we didn’t even get a hint about Beth. Her kidnapper may, in fact, turn out to be a benefactor. It may be that her kidnapper is aware of Terminus and how they operate but unable (or unwilling) to intercede thus creating another vector for outside help. This also raises the question of time and distance: just how far away is Terminus from the funeral home? The show has played fast and loose with travel time and location before so I’m not especially worried about this, but it would be nice to get a “lay of the land” at some point.

Rick’s transformation was animalistic in more ways that just biting Joe. It reminded me of Watership Down”. Fans will see this as an apt metaphor for the second half of the season: The group was forced out of safety by a great danger and faced terrible challenges on the road. This changed them, made them stronger, braver, able to take on more.

There’s one point in the book where, when preparing for a raid, one of the rabbit’s announces “I shall be disappointed if we don’t meet a cat after all this […] I feel a really dangerous animal.” I get that sense from Rick at the end of the episode: he isn’t frightened or unsure of himself. He’s ready. Ready to accept Terminus for whatever it may be, good or bad. Ready to defend it if it turns out to be worth defending, or ready to burn it to cinders if not. Rick is a dangerous animal now and those people have no idea who – or what – they’re screwing with.