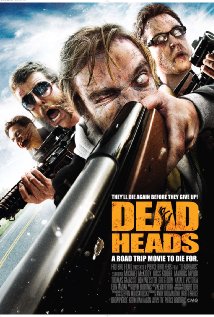 This was our first selection for Boiled Eggs and Brain Eaters 2014 and, it turns out, our pick of the day. When I was a teenager seeing “The Return of the Living Dead” for the first time it would have never occurred to me that at some point there would be too many zombie movies, much less zombie comedies, to keep up with. Zombies were niche, at best, and would be forever also-ran to slashers and vampires. Now, nearly 30 years later, zombies are king and everybody that can scrape together enough cash, gumption or weed (or any combination of the three) thinks that they can produce the next great zom-com.

Most of them suck. This one doesn’t; at least not much.

The gimmick here is that some zombies, just a tiny few, don’t actually lose their minds during the reanimation. We follow Mike, a regular Joe who finds himself dead-but-moving and decides to track down his fiancé. He meets Brent, a stoner free-spirit who is altogether more comfortable in his zombie-hood. They’re being hunted down by a nefarious company that wants to take them apart and see what makes them still tick.

Most of the humor revolves around our slackers failing up as Mike and Brent shamble their way across the country, constantly on the verge of disaster. Mike’s uptight and Brent’s an ass. They’re losers, but they’re likable losers. There’s plenty of harmless (and some armless) slapstick and a horde of fun genre references. Some hits and some misses, but there are multiple laugh-out-loud moments.

There are problems, but nothing you wouldn’t  expect at this budget level. Many of the characters push past cliché into caricature territory and there are definite teeth-marks on the scenery, but there’s a “when in Rome” kind of vibe that lessens the impact. The effects suffers for the budget, but are kept simple and effective to compensate. The script tries to work just a few too many angles and ends up bogged down in places.