Zombie of the Week: Bicycle Zombie

Posted by kiwidust on May 4, 2014
Posted in: Zombie of the Week. Leave a Comment 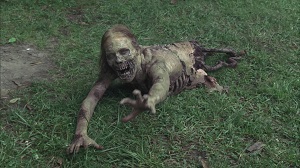 Just as in the comic, Rick comes back a week later and puts a bullet through her head. Rick can be kind of a jerk sometimes, uh?