Movie Review: Detention of the Dead 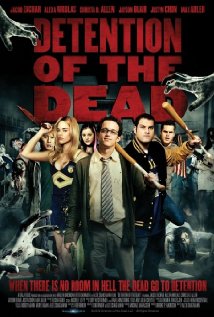 “Detention of the Dead” on IMDB

There’s some “kids” (I say “kids” because the average age of the actors has got to be in the mid-thirties) who are stuck in detention. There are six of them cut directly from the cheapest, simplest cardboard that could be found. There’s a goth, a nerd, a stoner, a cheerleader, a jock and… another jock. Not really clear on the thinking there.

Anyway they’re all fine, but the rest of the school has caught, as my grandmother might say, “the zombie”. There’s really no explanation. They run around trying  not to be eaten while half-assedly exploring their differences in some of the most clichéd ways possible. Hey, there’s even a love triangle! A really, terribly depressing love triangle.

On the plus side, the effects were actually pretty good. Well, except for that one horrifyingly bad muppet-zombie-rat-thing. That wasn’t good. The acting isn’t half-bad; most of the problems there come from the casting.  The jokes are easy, at least, if not particularly funny. You like fart jokes? This has got them! Personally, I’m not a huge fan.

It wasn’t that great, but hell: it wasn’t that bad either. It was also, oddly, the third movie of BEBE 2014 that featured a stoner getting a zombie high. Does that say more than it should about the kind of people making zombie movies these days?

One comment on “Movie Review: Detention of the Dead”