Zombie of the Week: Viktor

Posted by kiwidust on July 14, 2014
Posted in: Movies, Zombie of the Week. Leave a Comment 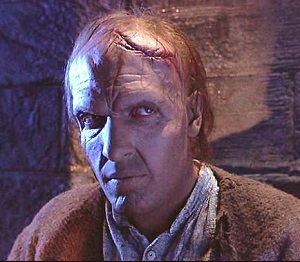 Our celebration of Frankenstein’s Monster as an honorary zombie is veering off a little this week. “The Bride” was not, let’s face it, a very good movie. It was overwrought, melodramatic and often ham-fisted. For all that, it did present a nicely original take on the old story and had pretty damn fine monster.

The dim-witted monster,  named “Viktor” by his only friend, was played to perfection by Clancy Brown. Brown is one of those rare actors that is absolutely great in everything he does. While his prosthetics here are, sadly, a bit unimaginative, his performance is layered and meaningful. The character is simple-minded, but capable of an impressive emotional depth. Brown’s performance captures his loyalty, devotion and need to be loved.

So the movie isn’t great, but Brown’s performance makes it well worth the effort. Because of him, we welcome Viktor into this admittedly not-so-exclusive club.