Zombie of the Week: Zombie Pigmen

Posted by kiwidust on August 11, 2014
Posted in: Zombie of the Week. Leave a Comment 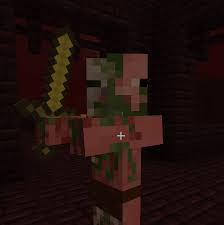 Previously we discussed regular old zombies in Minecraft, then we discussed their terrible little hellspawn, but up until now we’ve remained squarely rooted in reality. At least what passes for “reality” in Minecraft, which is pretty damn far from reality, but I hope you get the point.

However there is another reality. If you delve deeply and greedily enough and craft a diamond pick-ax, you’ll be able to mine obsidian. If you then arrange the rare obsidian blocks in an ancient, eldritch pattern (basically, a rectangle) and activate it with fire you will create a portal to this reality. You could also just cheat, I suppose.

Do you dare step through the portal and face the horrors of the other world?! Well, do ya? Dare, I mean? Well, if you do, you’re going to be face-to-rotting face with the horrific zombie pigmen of the Nether realms! They’re really not that bad.

I mean, yes, they are horrific.  They’re pigmen who are now zombies. That’s, at the very least, unsettling. But other than that, they’re pretty decent folks, really. They don’t bother you unless you bother them, they don’t mess with your stuff or fiddle with your radio presets. They just kind of wander around with their little golden swords out and ready.

Honestly, I wish more people were like them. I think I could deal with rotting flesh pretty well if people just minded their own damn business.